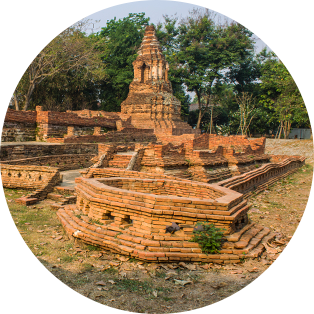 Chiang Mai, also known as the New City in Thai, is one of the most popular tourist destinations in Asia. But how did Chiang Mai appear and what should you know about it? At first, there were a multitude of Mon settlements in the area, and some of these are around 15-16 centuries old. That being said, the Chiang Mai we know today took shape mostly thanks to King Mengrai.
At that time, the Lanna Kingdom covered most of the Northern Thailand. At that particular time, it was bordered by the Khmer Empire of Angkor to the East; China was in the North, Siam was in the South and Burma in the West. It was in 1296 when King Mengrai started to build Chiang Mai. His primary focus at that time was to make Chiang Mai the capital city of his kingdom.
There were some other capitals of the Lanna Kingdom at that point, with Chiang Rai, Chiang Saen, Wiang Kum Kam and Lamphun being some great examples. That being said, the last capital of the Lanna Kingdom before Chiang Mai was Wiang Kum Kam. This was created in 1281, and it was situated very close to the present-day Chiang Mai!
The problem is that Wiang Kum Kam was destroyed by flooding in 1294, due to massive weather changes that affected the Ping River. In fact, it was hidden for more than 700 years, since it was discovered by mistake at the end of the 20th century. Nowadays, the ruins of Wiang Kum Kan are guarded at all times, and they are a national treasure.
This was the context in which the Lana Kingdom was at that time. So, with their capital flooded, they wanted to find a place that had fertile valleys, plains, rivers and high mountains. The region where Chiang Mai was located brought in the perfect location for their capital. Soon, Chiang Mai became the primary trading town between Burma and the Southern Chinese sectors.
Obviously, having control over this region became a great opportunity, so many neighbors tried to take this city from the Lanna Kingdom. In fact, the fate of Chiang Mai was sealed as they had to defend the capital for centuries. Burma finally managed to conquer it in 1557, and they incorporated it as a vassal state.
It was during the next 200 years that Chiang Mai went through multiple leaderships, usually it was a shift of power between Siam and Burma. That being said, in 1771 the Lanna King at that time got to remove the Burmese supremacy from the region, with help from Siam.
Around a century later, in 1892, the Lanna Kingdom and its capital Chiang Mai became a part of Siam. The kingdom was eventually dissolved, and it became just a 20000 km2 area in the Chiang Mai region.
In 1932, the entire Chiang Mai region became a part of Siam, and in 1949 Siam became Thailand. So, Chiang Mai did have quite an interesting history that spans over more than 700 years. Nowadays it is a cherished location and one of the most popular tourist destinations in the entire country!